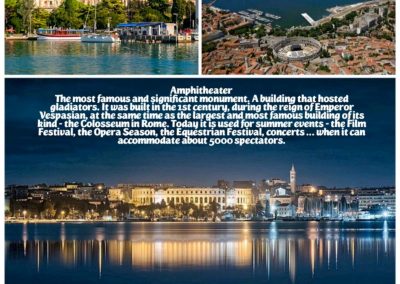 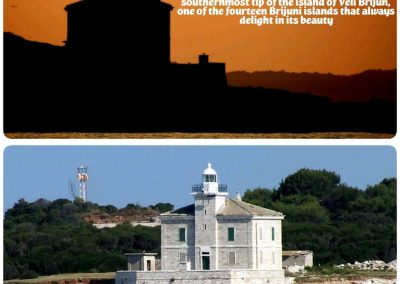 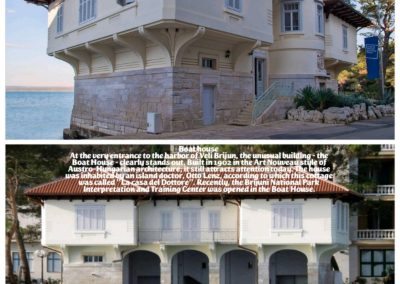 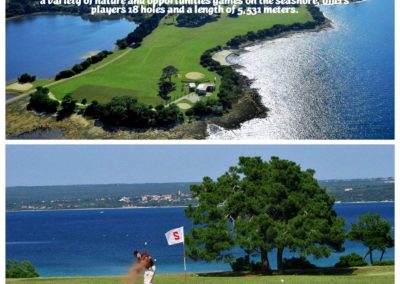 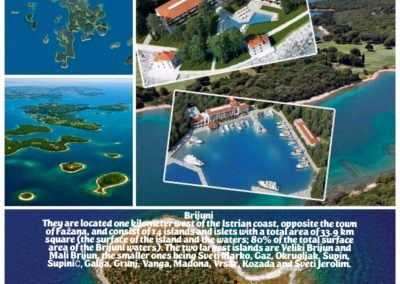 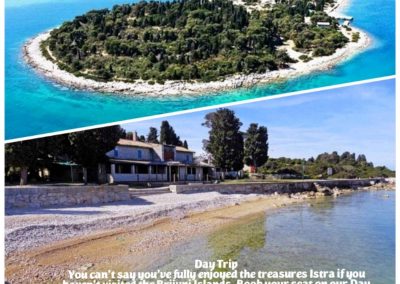 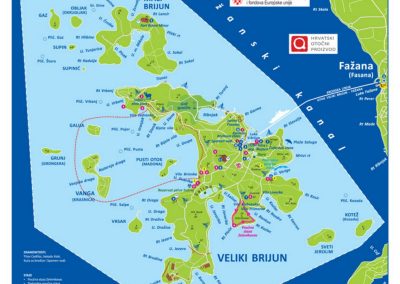 Croatia, Istria, Pula… So much in just three words! When we add the word Brijuni to that, the circle closes. We get the whole. Indeed, Croatia is a country with a beautiful coast, whose diamond is the province of Istria, and Pula is the city that shines brightest and illuminates the nearby Brijuni, islands that leave no one indifferent! One of the great men who often stayed on the Brijuni Islands was Josip Broz Tito, the president of Yugoslavia, a country that was strong and famous all over the world in his time. His guests were often great artists from the world of films, such as Sophia Loren, Elizabeth Taylor, Richard Burton, and many others. However, those times have passed, many people have come and gone, but the Brijuni have stayed, next to us, to give us their peace, beauty, and love, to remind us of the past, but also to show us the way to the future. That is why we love Brijuni, we often visit them and proudly show them to our guests during the summer. One way to do that is to go on a boat trip around Brijuni. There are many companies in Pula that make boat trips during the summer, and all of them do it by having boats circling around Brijuni, and guests enjoy the beautiful view, mild wind, the smell of the sea, delicious food, and cold drinks. There are two boat trips during the day: day and evening. But let’s say something about Brijuni.

THERE ARE A FEW GROUPS OF ISLANDS, NEAR THE COAST OF ISTRIA, AMONG WHICH THE MOST INTERESTING AND BIGGEST IS THE BRIJUNI GROUP OF ISLANDS. THE BRIJUNI ARCHIPELAGO CONSISTS OF 14 SMALLER AND LARGER ISLANDS: VELIKI BRIJUN (GREAT BRIJUN), MALI BRIJUN, VANGA, SVETI JEROLIM, SVETI MARKO, KOZADA, PUSTI OTOK, VRSAR, GAZ, GALIJA, OBLJAK, GRUNJ, SUPIN, AND SUPINIĆ. BRIJUNI ISLANDS HAVE A MILD, MEDITERRANEAN CLIMATE, WITH MANY SUNNY DAYS, WARMTH, AND PLENTY OF MOISTURE, WHICH IS SUITABLE FOR THE GROWTH OF DIFFERENT PLANTS AND MAKES EVERYBODY FEEL PLEASANT ON THE ISLANDS. THE AVERAGE ANNUAL TEMPERATURE IS ABOUT 14 ° C, AND IN THE SUMMER AROUND 23 ° C. THE SEA TEMPERATURE IN SUMMER IS BETWEEN 22 AND 25 ° C. MOST PLACES IN ISTRIA HAVE HISTORICALLY BASED BILINGUAL NAMES, SO THE CROATIAN NAME BRIJUNI IS SIMILAR TO THE ITALIAN NAME BRIONI. THE ISLANDS WERE NOT ALWAYS CALLED THAT WAY, THEIR NAMES CHANGED OVER TIME. FROM THE TIME WHEN VENICE RULED ISTRIA, WE KNOW MANY FORMS OF THIS NAME BUT IN 1421, THE NAME BRIONI WAS MENTIONED FOR THE FIRST TIME. THIS NAME WAS USED IN THE ITALIAN LANGUAGE, AND THROUGH IT ALSO ENTERED CROATIAN, SO BOTH VARIANTS HAVE REMAINED IN USE TO THIS DAY – BRIONI AND BRIJUNI. THE BIGGEST AND MOST INTERESTING BRIJUNI ISLAND IS VELIKI BRIJUN (GREAT BRIJUN). THIS ISLAND IS A REAL EXAMPLE OF THE HARMONY OF NATURE AND HUMAN EFFORT. IT CONSISTS of A LOT OF PARKS AND LAWNS, AND IT ALSO CONTAINS CHARACTERISTIC VEGETATION THAT COULD BE SEEN ELSEWHERE IN ISTRIA. ANIMALS BROUGHT TO THE ISLANDS AT THE BEGINNING OF THE 20TH-CENTURY, TODAY WALK CARELESSLY THROUGH THE OLD FORESTS. BRIONI ISLANDS ARE INHABITED BY DIFFERENT ANIMALS, BUT THE MOST NUMEROUS ARE BIRDS. THE BRIJUNI ARCHIPELAGO HAS AN VERY RICH CULTURAL AND HISTORICAL HERITAGE. MORE THAN FOUR THOUSAND YEARS HAVE PASSED FROM THE CREATION OF THE FIRST SETTLEMENT TO A MODERN SUMMER AND HEALTH RESORT. Brijuni National Park is now visited by a large number of tourists, but many enjoy the view of the islands from the boat. It is enough to spend a few hours on the boat, to enjoy and get an impression of the islands from another perspective. That is why we organize boat tours around Brijuni Island. We think that boat tours around Brijuni Islands are a great way for guests to get a better impression of the area they are visiting.

Well, now you know why our Brijuni is so interesting, but that’s just part of the story. There is still a lot to be said, but for now, let it be so. The main story begins when you go on a boat trip with us, around the islands, with a cold drink, enjoying the beautiful view, the sunset, and the dolphins play.

When you come to Pula, one of the first things is to hear about the Brijuni Islands, and when you find out that they can be seen from the boat, there is nothing left but to look for the first boat and board. There are many boats in Pula that make boat trips around the Brijuni Islands, but one of them is special – Burin. All boats on the Pula waterfront do the same thing, organizing trips twice a day – around 12 and around 6 pm, but this boat is special because of its crew that makes life better for its visitors. Not only food, drinks, and music, but also the good mood that is spreading are the reasons for a great visit to the boat Burin. Passengers onboard are always in a great mood, during the day or in the evening, it’s the same thing, so whichever boat tour you choose, you can’t go wrong. There are also those who go with us on a trip around the islands of Brijuni twice in one day. If you decide to be a part of those who enjoy onboard with music, food, and drinks, do not hesitate to reserve your place on board.